Svitzer’s new tug in Fremantle honours an employee who’s been there and done that.

As the latest addition to Svitzer’s Australian fleet was a week away from arriving in Fremantle, it created a pleasant surprise for the man the Svitzer Newton is named after.

“I knew there was a poll among the employees, to find a name for the new tug,” says Steve Newton, Manager – Logistics & Procurement at Fremantle. “But I had no idea my name would be popular. I rang up an employee one night to make sure a gate was locked, and she said, ‘Steve, your name’s getting a lot of votes’.”

The Svitzer Newton, which arrived at its new home during the end of May, is a fitting tribute to a man who started working at Port of Fremantle in February 1972 as a school leaver, and has been at the same company for 46 years.

“I was offered a job as a trades assistant with the Prince Launch Service while I was at high school,” says Steve, now 62. “After 18 months I was offered an apprenticeship as a diesel mechanic and I was hooked.”

Prince Launch Service would go through several corporate owners – including Elder-Prince Marine, Stirling Marine and Adsteam Marine – before entering the Svitzer portfolio in 2007. During this time, boat-building in the Australian marine industry was increasingly being conducted offshore. However in the 1970s Prince was still a ‘one-stop shop’ marine services company, which constructed and maintained boats as well as being an operator of tugs, pilots, crew boats, landing barges, working boats and crane-barges.

“We were based in a workshop on the river, just beside the foot traffic bridge – it’s apartments now,” says Newton. “Anything to do with boats – we did it.”

From that workshop, Prince built boats, maintained boats and serviced the engines, electrics, propellers and gearboxes.

Steve says one of the boats he helped build in his apprenticeship – a C-class tug called Biggada – is still working in Kwinana as a C class Tug.

“We were building wooden boats and the foremen wouldn’t let anything go out that wasn’t top-notch. It doesn’t surprise me that Biggada is still working.”

For apprentices like Steve, it meant learning everything about diesels and gearboxes. He worked on Rolls-Royce, CAT, Perkins, Cummins, Lister, Detroit and Volvo and had to be able to rebuild Allison and Borg-Warner, twin-disc gearboxes, and repair generators, which meant having a working knowledge of electronics as well as mechanics.

Yet, following almost half a century working on boats up and down the West Coast, Steve has done as much looking at a road as he has at the sea. Because of his expertise across all engine types, Steve was the trouble-shooter for the Prince fleet which operated from Bunbury in the south of WA to Port Hedland in the north (and later Darwin).

“I was always on call,” says Steve. “The owner would call me in the middle of the night, or pull up while I was mowing the lawn on a Sunday. I had to drop everything and go.”

Prince’s didn’t have spare or back-up boats – if there was a problem with power, Steve was sent in to fix it. Which entailed a Holden 1-tonne ute, a diesel engine on the tray, and a boilermaker beside him in the cab.

“We’d wait for the boat to come in, and we’d be straight into it,” says Steve. “The boilermaker would be cutting a hole in the deck and I’d be below disconnecting everything and dealing with the fluids – it wasn’t the job you wanted in the middle of summer.”

The old engine would then be craned-out and the new one craned into place and set-up while the boilermaker returned the deck to normal. Then Steve would conduct a quick sea trial and have the boat ready for its next trip.

On the Barrow Island landing barges – which have three or four engines – Steve and his offsider would bring piston and sleeve kits on-board, roll the failed engine on its side while the barge was running its routes, and rebuild the engine at sea. When there were propeller problems, Steve and his boilermaker – if they were in the north of the state – would run the boat onto the sand and wait for the tide to go out. They’d replace the prop and couplings – and often the gearbox – before the tide came in again.

“There wasn’t much rest,” says Steve. “We could drive for ten hours and then be straight into it. The company had contracts to provide certain services and you couldn’t have a boat sitting there doing nothing.”

In one mercy dash in the Holden, Steve and his boilermaker had to take a stack of marine plywood from Perth to Port Hedland to repair a damaged landing barge. At 3am, North of Carnarvon, a kangaroo jumped into their path and landed in the engine bay.

“I hitchhiked back to Carnarvon, bought a new radiator, hoses, water pump and all the assembly, and then I couldn’t get back to the ute. So I blew all of our expenses money on a taxi to the ute [30km out of town]. We fixed the ute and got going, and didn’t eat very well for the rest of the trip – in those days we were given an envelope of cash, and that was it.”

Steve would become the Workshop Supervisor of the Port Hedland office, and on returning to Perth he would later be made the assistant to the Marine & Technical Manager for WA dry-docks including Karratha, Fremantle and Darwin. In 1992, he was given his current senior role at Fremantle and says he’s in awe of the new boats that Svitzer operates.

“The V16 CATs in the new tug make a lot of power – it’s 70-tonne bollard pull,” says Steve. “The big change from my early days is the amount of electronics on the new vessels – probably ten-times the amount that we had to deal with in the seventies.”

In line with his profession, Steve’s idea of a day-off involves boating and some crabbing and fishing. And he and his wife of 38 years – and their two children – enjoy their weekender at Mandurah.

“I’m surprised and humbled by the naming of this tug after me,” says Steve Newton. “It’s probably quite fitting; I got the salt in my veins when I started out in this job, and this tug just extends that passion.” 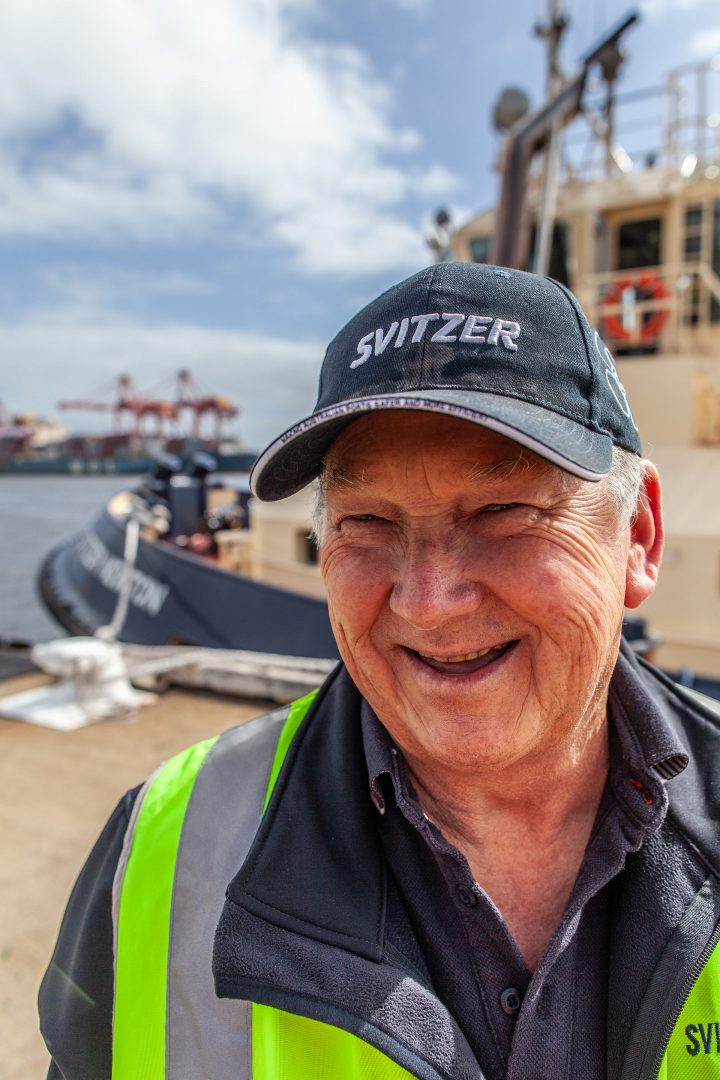 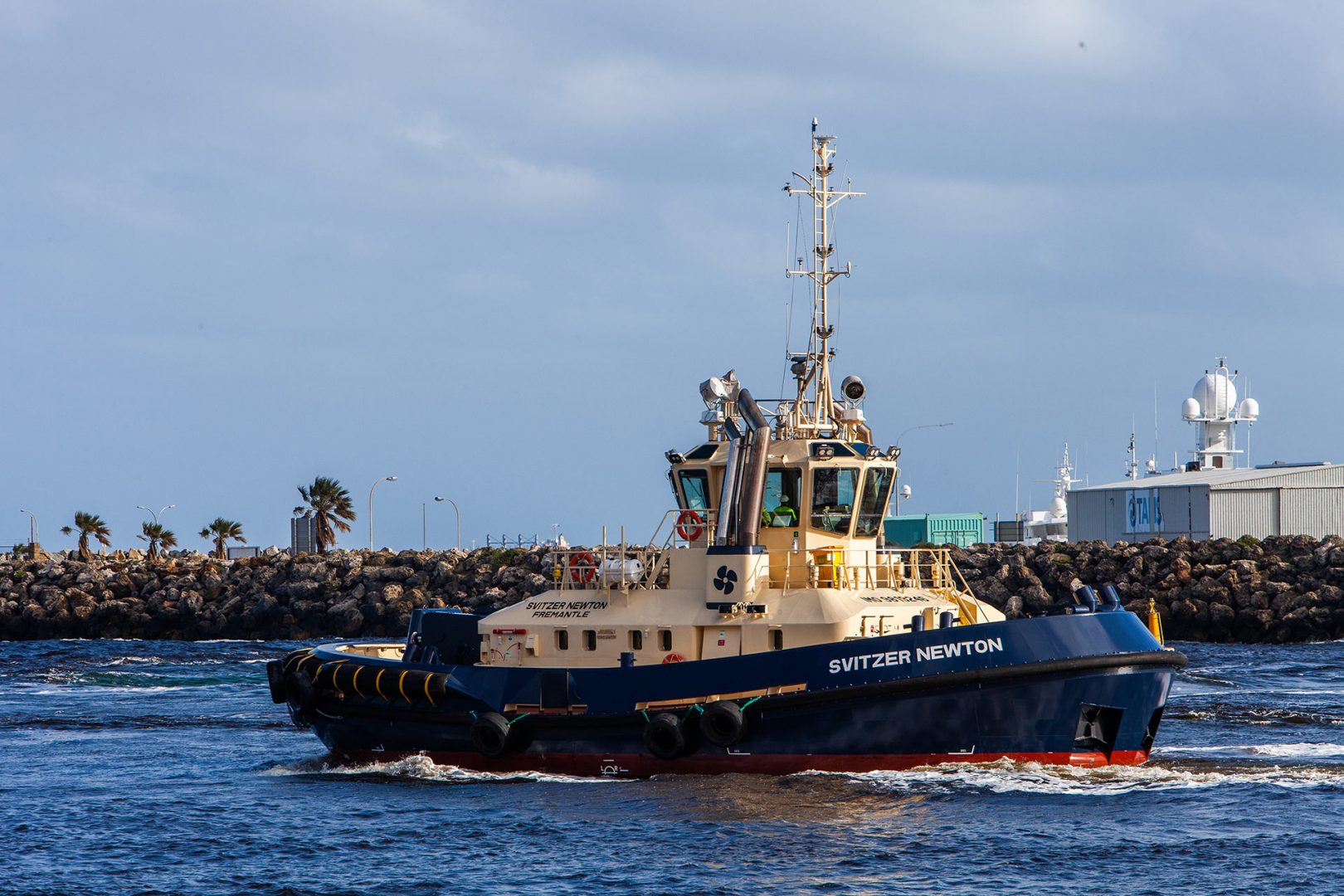 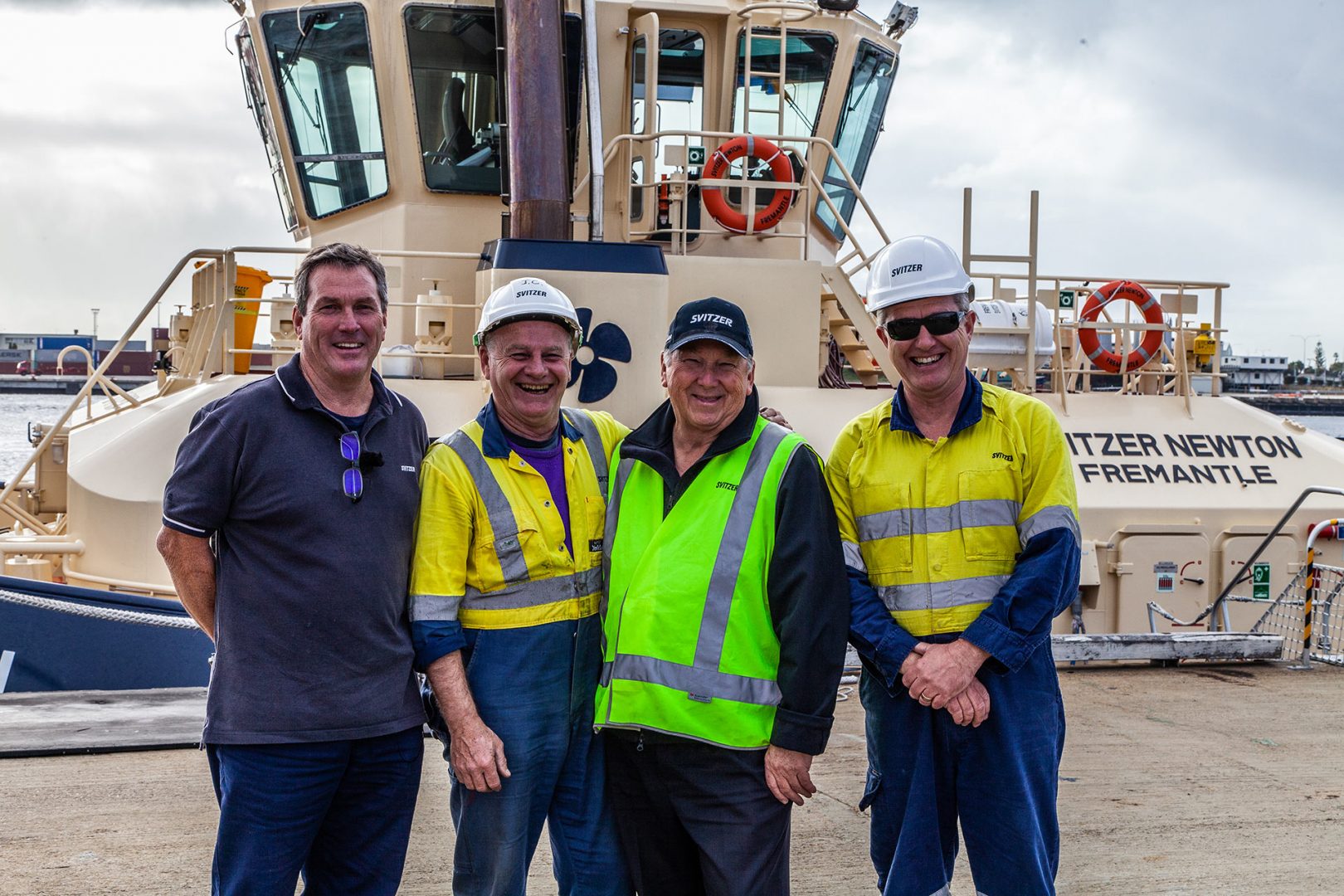