SVITZER is about as old as towage companies come, dating back to 1833 the company is by no means stuck in the past; it is working to bring new technologies into the tug life. To help nudge the company down the road to the future, Svitzer Australia in January brought on board David Bartnik as its new head of innovation. Mr Bartnik came to Svitzer from the start-up sector. “In many ways I’d like to bring a startup approach into Svitzer because I think every organisation needs to learn some of that,” he said. “I think it’s what’s going to power the future and Svitzer needs to be a part of that.”

The data-enabled tug project is one way the future is coming to the towage sector. The project, which is ongoing, aims to collect data from tugs and use the data for various applications. Mr Bartnik said the project uses voyage data recorders very similar to what are used on ocean-going vessels. “The initial motivation was for safety and recording in case there were incidents,” he said. “But it soon became apparent that if you were capturing that data and you’re in a port, you can easily send it off the boat as well –that’s where the whole idea behind the data-enabled tug project came from.” Nearly every industry is going digital, Mr Bartnik said, pointing to the data that comes from cars, washing machines, search engines and Google Home. “It’s all being recorded by someone – there’s no reason that tugs should be any different,” he said. “We’re still looking at what we’re going to do with the data from the tugs, but the first focus is on getting the data off the tug and into the cloud.” Uses for the data are manifold, increasing fuel efficiency is an obvious one, Mr Bartnik said, but the data could also be used to save on maintenance. “Say, for instance, engine maintenance is due after 500 hours of work,” he said. “But, 450 of those hours were relatively low-stress, the next scheduled maintenance might be pushed out to 600 hours.” Marine pilots could also be beneficiaries of the data- enabled tug. “A pilot might say, ‘give me 50% power’, and they would actually be able to see what’s happening on the tugs on their PPUs [portable pilot units] in real time,” Mr Bartnik said. And, there is no doubt that there will be many applications for tug data that haven’t even been dreamed of now, he said. “We’ve looked at potentially installing depth sensors the tugs, and then potentially that information might be valuable to the port authorities, so you have up-to-date information on depth,” Mr Bartnik said. “Ideas are the easy part; implementation’s the hard part.”

A bit of technology that has been implemented in Svitzer’s tugs is an app that records timing of jobs. “It used to be, not so long ago, that all the times had to be recorded manually,” Mr Bartnik said. “Now we have an app where basically the master presses a button six times and it records those timestamps automatically.” But, there is still much that can be done in the realm of software, Mr Bartnik said. “It’s probably fair to say that the explosion of software applications we’ve seen in the online space in the past 10 years hasn’t really reached the maritime sector that much,” he said. “There’s an enormous amount of paperwork that’s still done in this place, and there are lots of opportunities to automate that process and make people’s lives easier and give us more reliable information.”

A major technology initiative that the global Svitzer is working on in partnership with Rolls Royce is the Optimus Project, where a tug carried out several remotely controlled manoeuvres in Copenhagen last year. The vessel’s captain, stationed at the vessel’s remote base at Svitzer headquarters, berthed the vessel alongside the quay, undocked, turned 360°, and piloted it to headquarters before docking again. Mr Bartnik said the project was really an exercise in what might be possible. “There is a lot of work in developing the sensors around the tug so you can provide the information to the remote user, and this has implications for safety systems as well,” he said. “Frankly the issues [around autonomous vessels] are not technical, they’re regulatory, same as with autonomous land-vehicles like cars, the issues are regulatory. “In a lot of ways I would be pleased when they bring in autonomous trucks because ultimately, our roads will be safer.” As Svitzer is part of the Maersk Group, the towage and salvage company can be seen as a relatively cheap test-bed for technology that could be applied to the parent company’s ocean-going vessels. “Instead of fitting a $200m containership or whatever, you can fit a $10m tug and have it paddle around the harbour,” Mr Bartnik observed. However slow progress may be, it is sure that the tugs and towage industry is moving inexorably to a brave, new and data-powered future. 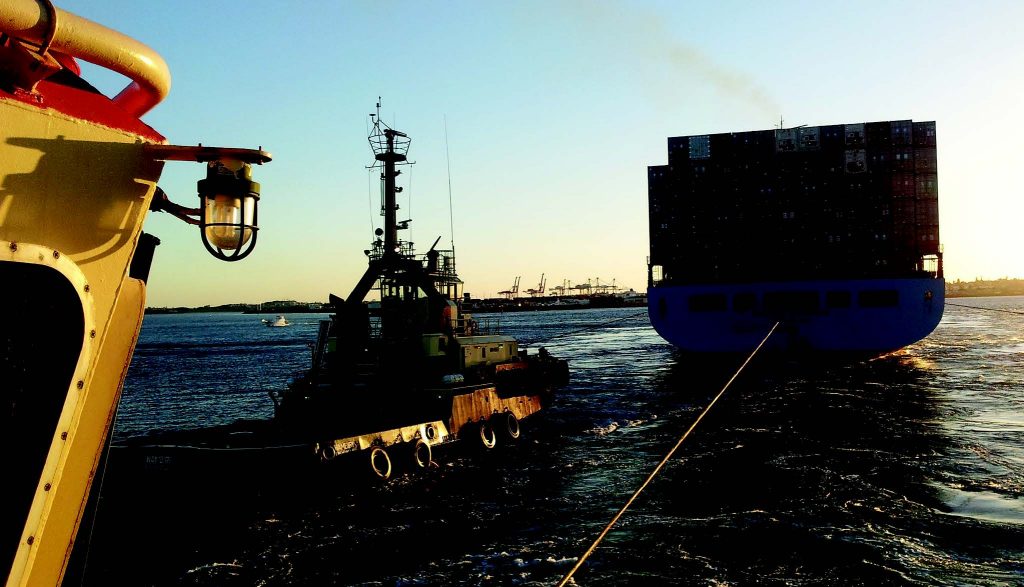