The Changing Face of Shipping

Svitzer Australia is working to change the face of shipping. International Women’s Day on 8 March 2019 was an opportunity to reflect on the work being done by Svitzer’s global parent group, Maersk, to create an inclusive culture. Maersk has targets for representation of women on the Board of Directors, targets for representation of women at all leadership levels, and targets for people who are from non-OECD high-income countries.

At Svitzer Australia the results are improving but mixed, with just under 50 percent female representation at the senior leadership level, with very few women of any level on the seafaring side.

Laavanya Pari is the new face of Svitzer Australia as the company places more emphasis on a diverse workforce in what has traditionally been a male domain.

Laavanya has been working within the Svitzer Australia finance department for six-and-a-half-years. In February 2019 she became Chief Financial Officer, having previously worked as an auditor at Grant Thornton accountants and then in the finance side of medical technology company, iMed.

“When I started at Svitzer Australia, I was the only woman in the finance team and one of only a couple in the whole office,” says Laavanya, also a mother of two. “Now, with me becoming CFO, almost fifty percent of the senior leadership are women.”

She says the encouragement of women to take on-shore positions at Svitzer is a logical first step for a more gender diverse workforce, but more work will have to be done to encourage women to apply for seafaring jobs.

“It isn’t just a gender issue,” she says. “Many of our mariners are approaching retirement, which means a potential skills shortage in the future. If we can encourage women to apply for these positions then we have a much bigger pool of candidates and we’re less likely to have skills shortages.”

One of Laavanya’s main jobs as CFO is to ensure that the finance systems operate efficiently, and that reporting is timely and accurate. However, to support Svitzer into the future she is presiding over a technology upgrade which will see some of the older legacy systems replaced with a cloud-based platform that will be more efficient and able to grow with subsequent new technologies.

On the mentoring side, Laavanya says she doesn’t run any formal mentoring for female employees but she does create scenarios where women are encouraged to extend themselves.

“I’ve noticed in my career that men are more likely to put their hand up to try something new, even if they aren’t totally qualified, whereas women are more likely to eliminate themselves from the running because they believe they don’t have one of the skills being asked for. I saw this in the advertising we did for a new role that crosses a lot of accounting disciplines – the job was suited to women but we don’t get many women applying because perhaps too many skills were listed.”

Laavanya says that diversity programs are successful when they ensure that people of all backgrounds feel they’re included and that they’re allowed to develop, improve and learn leadership skills. The most important component of diversity at the personal level is confidence, and at an organisational level, representation at leadership levels.

“I could look at the Maersk group executive in Denmark and see that fifty per cent are women and Svitzer’s CEO is a woman (Henriette Thygesen). That’s an important signal to people who might otherwise believe that they’re outside the main group of people who can be executives. I hope young women look at this company and think ‘I can be an executive’. I hope young people with dark skin can look at me and feel confident about where they can go.”

“At Svitzer, we have parental leave that covers both parents and there’s a really flexible culture of setting your own hours, so long as the work is done. That kind of flexibility is a big issue for women who also have family commitments.” 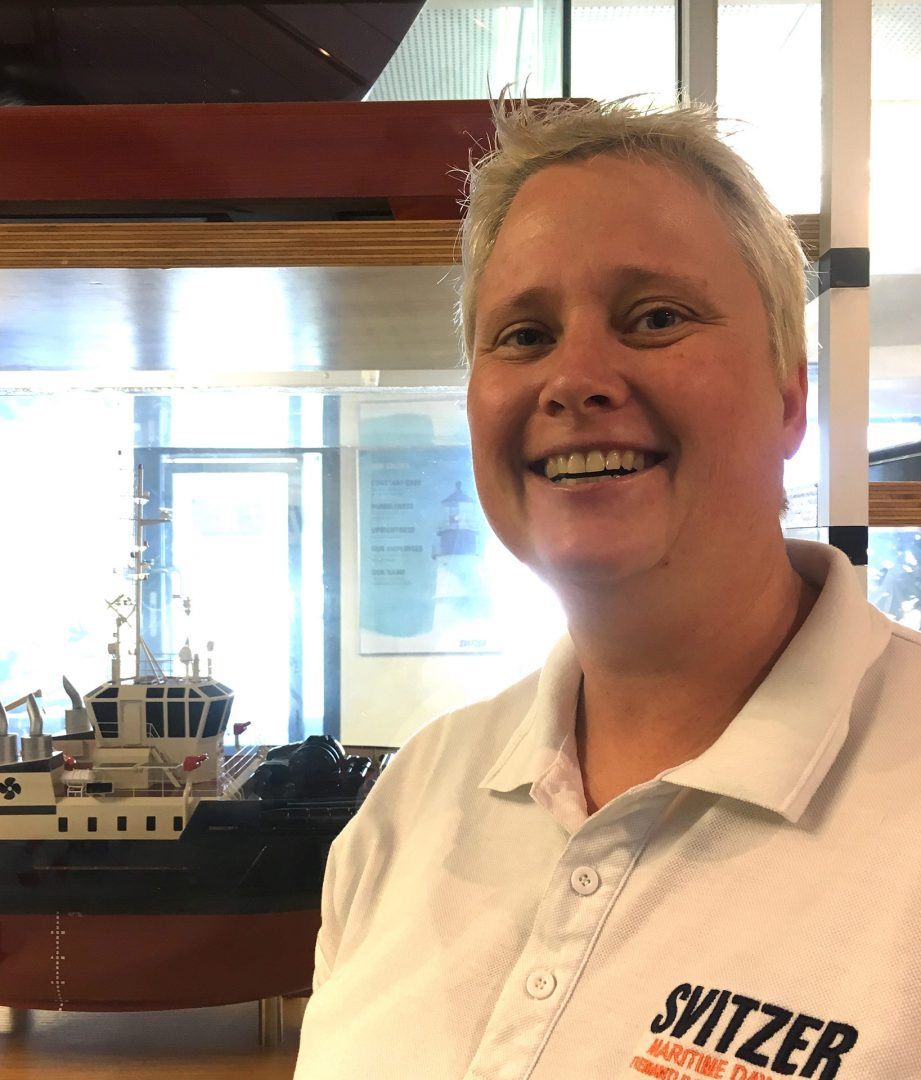 She also acknowledges that she has “three diversities” since she is also of Sri Lankan background and is in a same-sex relationship.

Some senior women at Svitzer credit at least some of their success to mentoring. Cheree Figg, now Svitzer Australia Port Manager – Darwin, says she was encouraged and mentored when she worked at AsiaWorld Shipping, and at Svitzer she was mentored as she progressed through Operations Officer to Operations Manager at Adelaide before being offered her current position.

At Svitzer Australia’s Fremantle offices, Kelly Kruger has forged a path that promotes gender diversity in the Svitzer workforce. Now the Regional Technical Manager, working with the managers to ensure the fleet and buildings are fit for purpose, Kelly began her working life doing a ships engineer cadetship with BHP 25 years ago. She spent more than a decade at sea before taking landside jobs.

“When I got my cadetship, I was the only girl from ten engineer cadets,” says Kelly. “From the ten deck officer cadets, two were girls. And those numbers were considered a giant leap forward in those days. Seafaring just wasn’t considered a job for women.”

She says Svitzer has done more than most employers to ensure that it is hiring groups that are traditionally not represented in maritime services companies, and the office personnel at Fremantle is roughly 50/50.

“Having a diverse hiring policy is a good start, but you need the employment conditions, too,” says Kelly. “At Svitzer we have flexible working hours so anyone with kids can do drop-off and pick-up. It makes it easier to have a work-life balance.”

“When I was at sea, I would take the younger women aside and give them some tips on how to present themselves professionally and how to deal with sexist comments. I’m keen to help young women develop in this office but it’s a very different environment to seafaring.”

Maersk Global Targets and Performance on Diversity and Inclusion 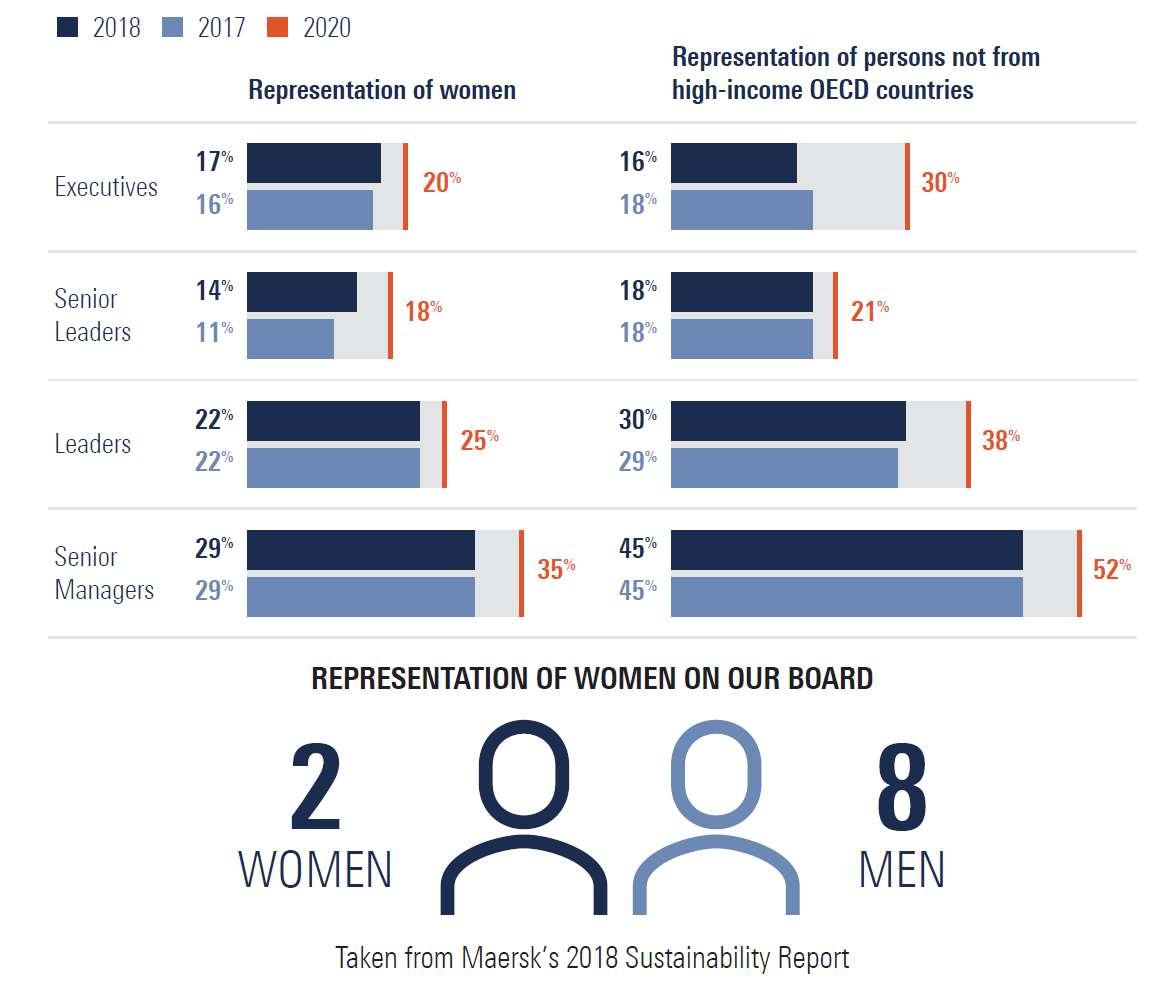 Previous
Next
All Ports Corporate Darwin Fremantle
Scroll to top